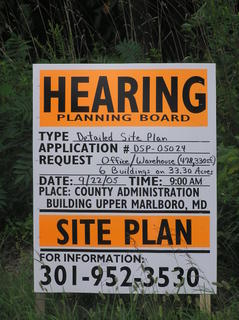 70-day limit has been waived.

This recommendation is not in the CEO's Capital Improvement Program released for public discussion. Instead, the deferral was raised in a committee work session outside the general public view.

When is the public to be informed? After the hearing process is over?

I suggest that citizens concerned with school overcrowding in the Laurel-Beltsville area attend the Board of Education's next (and last) CIP hearing next Monday night [Sep 10, 2005] at 7 p.m. at the Sasccer Building in Upper Marlboro. You have to call in advance to sign up to speak (301-952 -6308).