Feb 8 Ripped from the Headlines: Laurel in the News Exhibit Opens at Laurel Museum 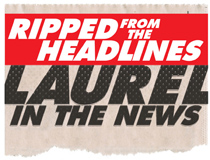 Laurel, Maryland…What makes news? In Laurel, Hurricane Agnes, Spanish Flu, George Wallace, 9/11, fires, robberies, murders and integration battles made (or didn’t make) headlines. All are part of Laurel’s history. How the local media covered these and other events is the focus of the Laurel Museum’s newest exhibit:  Ripped from the Headlines:  Laurel in the Newswhich opens February 8, 2015.
A piece from the North Tower of the World Trade Center, a Life Magazine on the Wallace shooting signed by George Wallace, fire and police equipment, and materials salvaged from Hurricane Agnes’ flood destruction are among the objects on view that will accompany the news stories.  Visitors will also encounter long-forgotten names like John Sedlick, Mrs. Burroughs, John Morgan and Carol Replane, in sometimes tragic, and occasionally funny stories that gripped local attention over the past 118 years.  Interspersed throughout the exhibit:  advertisements for long-forgotten products and businesses that provide their own humorous look at life in Laurel since 1897.
Ripped from the Headlines is designed to be both a journey into the past, and a thought-provoking exploration of “news.”  Visitors are encouraged not just to read the stories, but to ask questions such as what gets covered and why, what happens if stories aren’t reported, and how coverage today is different from the past. The exhibit centers on stories as they were covered in the home-town paper, and commemorates the LHS’ acquisition and digitization of The Laurel Leader.
“Our recent acquisition and digitization of the Laurel Leader opens up resources beyond what we could have imagined years ago.  ‘Ripped from the Headlines: Laurel in the News’ highlights these new windows into the past while also asking our community to think analytically about news coverage over the years, “ stated Laurel Historical Society Executive Director Lindsey Baker.
The exhibit is divided into seven sections. Bad Luck Beat uncovers tragedies of many forms, ranging from train wrecks, to the devastating 1918 Spanish Influenza, and fatal buggy accidents. OffBeat, explores topics ranging from The Woman’s Club of Laurel to Prohibition.  Firehouse Beat looks at some of the fires over the years that shaped the community – and led to creation of the fire department. The Disaster Beat focuses on Mother Nature and the floods, tornados and earthquakes that damaged property but not town spirit.
Laurel has been the focus of stories that made national news, and the National News Desk explores how 9/11 and the Wallace Shooting were covered locally.  Law and Order reminds us of some of the crimes that shook the community when they happened, but which today are largely forgotten, including the Basu carjacking, a Citizen’s National Bank Robbery, and The Hargis and Replane Murders.
Editorial: Integration provides an in depth overview of the coverage that accompanied one of the most difficult and divisive eras in Laurel history – school integration, particularly from 1954 to 1985. It explores whether the coverage reflected the reality of the integration process, community values, or wistful thinking, controversies that arose, and raises the question of whether or not the schools are in fact integrated.
Ripped from the Headlines runs through December 20, 2015 at the Laurel Museum.  The Museum is open Wednesdays and Fridays 10-2, Sundays 1-4. Group tours by appointment.  Admission is free. The digitized Laurel Leaders and other items from the LHS collection are open to researchers by appointment Monday-Friday
The Laurel Museum is located at 817 Main Street, Laurel, Md.  For appointments or for additional visitor information contact info@laurelhistoricalsociety.org or visitwww.laurelhistoricalsociety.org  #