2015.03.09 UPDATE
2015.03.09 The Missing was located earlier this morning and is in good health and condition, according to our local PGPD District VI Community Oriented Policing Services team.

Onwudiachi is described as an African-American female, 5’11”, 150 pounds, with short hair and brown eyes. She was last seen wearing a black jacket, pink shirt, and gray pants.

Anyone with information on her whereabouts is asked to call the Prince George’s County Police Department’s Regional Investigation Division – Northern Region at (301) 937-0910. 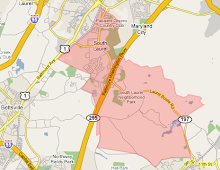