Laurel, Maryland…Where do exhibit ideas come from? How is an exhibit developed?  What new historical discoveries can research uncover?  Looking back at topics from the Mill House to Mill Workers, from Civil War soldiers, WWII, the 1950’s and Lost Laurel, Behind the Bricks: 20 Years of the Laurel Museum, which opens February 7, 2016 at the Laurel Museum answers these questions. The behind the scenes look explores the discoveries, collections, volunteers and staff that inspired and created more than 20 exhibits since the Laurel Museum’s brick home opened to the public in May 1996.

Visitors to the exhibit will get to see the 1845 Laurel Cotton Mill ledger, a George Nye Diary, women’s hats from the 1940s and 50s, one of Bert Sadler’s early 20th century glass photographic plates, postcards, a Laurel-made grandfather’s clock, historical documents and more from the Museum’s collection.  They’ll also obtain insights into its 20 years of exhibits.

”Visitors to the Laurel Museum often ask how we develop an exhibit and how we keep coming up with new ideas each year,” stated LHS Executive Director Lindsey Baker. “Behind the Bricks: 20 Years of the Laurel Museum is our opportunity to let visitors take a peek behind the scenes into how exhibits are produced at the Laurel Museum. Our goal is to let visitors in to learn a little bit more about how their community museum decides to shape the stories about Laurel’s history year after year. “

Behind the Bricks is divided into 10 sections. The sections “From Idea to Exhibit,”  “HATJAT: Here’s A Thought, Just A Thought,” (*) and “A New Twist on Old Ideas”, explore the various inspirations, opportunities and materials that underlie the decision to proceed with a specific exhibit theme and focus.   Sometimes it’s an anniversary, such as The Civil War and WWII, and other times a particular collection, such as postcards or the Sadler collection of photographs that spark an idea.  The exhibit also explores how materials such as Sadler collection photographs, and Laurel Leader newspapers can reappear but with a new/different emphasis or new interpretations that let visitors see them with fresh eyes while discovering new information about Laurel’s past. For example, the 15th exhibit, “Snapshots in Time:  Our Community in 1910 and 2010” used Sadler photos from 1910 to compare Laurel 100 years apart.  Twelve years earlier in 1997 an exhibit explored Bert Sadler’s photos as art as well as community photographs.

“There’s Something About the Mill” continues the new interpretation theme – but with a twist. Community interest, deep resources, and its role in Laurel’s origins and growth all contribute to the many exhibits that have incorporated the Laurel Cotton Mill story – from “George Nye and His Diaries” to “I Was a Laurel Mill Worker”.  Visitors will be asked to match each exhibit with either the Interest, Resource or Origin theme that underlies its focus.  “From Our Attic to Yours” explores the Museum collection, how it grows and some of the collectors who have helped fill out various exhibits. Additional sections cover Volunteers and the Laurel Shop – including a display of all the holiday ornaments. A special timeline that covers the period from before the Museum had a permanent home to the present lets visitors revisit all the exhibits – including those displayed in various locations before the building opened to the public.

The Laurel Museum is located at 817 Main Street, Laurel, in a brick former mill workers home originally constructed circa 1840.  In 1991 the City of Laurel, which acquired the building in the 1980s and still owns it, offered the Laurel Historical Society the mill workers' house to become the Laurel Museum. After extensive renovation it opened to the public in May, 1996.

Behind the Bricks runs through December 18, 2016. Admission is free.  The Laurel Museum is open Wednesdays and Fridays 10-2, Sundays 1-4. Group tours by appointment.  Admission is free. The Laurel Library and digitized Laurel Leaders and other items from the LHS collection are open to researchers by appointment Monday-Friday. For appointments or for additional visitor information contact  301-725-7975 or info@laurelhistoricalsociety.org or visit www.laurelhistoricalsociety.org

(*) HATJAT is a word developed by LHS members Ken Skrivseth and Karen Lubieniecki that has become a frequent part of the LHS Lexicon. 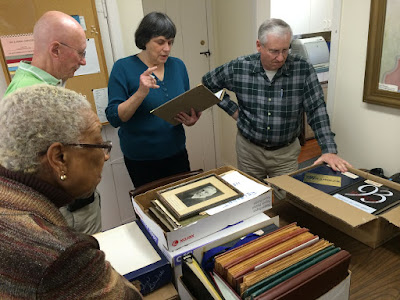 Additional photos and captions including items from the collection, Museum Founders Betty Compton and Jane Cole, two exhibits featuring the Sadler Collection of Photographs, and the Laurel Museum in 1952 and the 1970s prior to renovation can be found at http://bit.ly/BehindtheBricksPhotos